Kind of a long story involving this group of dogs.. originally the scene I was recreating is called "Intruder" I often like to recreate a scene from old oil paintings..  I was approached to recreate a dog for a woman and in return I agreed to let her make me a structure.   Unfortunately the piece was not the quality I expected or size.  I photographed them in a barn I own just so I can show them all together as they should of been.. I am remaking this family in half scale (that is what the structure is) so the piece I received can be used for photos if nothing else. I hope to have the smaller scale family made by next year.. notice the terrier brothers are part of the family. 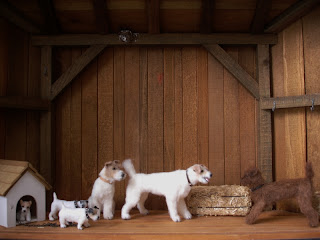